On our way home this afternoon we drove in rain for a bit but when we turned east on the highway about 6 miles from home it stopped and there was a break in the clouds and this was our view. Spectacular isn't it?  Since there was no one on the highway in front or behind us we stopped for a bit and I snapped this photo with my cell phone.  The thunderheads to the east were just beautiful with the sun highlighting them.

We made it home before the rain arrived.  The storm came from the west, as usual,  and we had a quick hard rain then it was done.  Most of our storms in the summer come from the west or south west.  Weather watching is a big thing here and everyone keeps an eye on storms and listens to the weather guys/gals as things can become dangerous rather quickly with high winds, heavy rain, hail and occasionally tornado warnings.  I make it sound like we have horrible weather…not what I mean.  I mean that here we just want to know if something is brewing in the skies and take the appropriate action.  Farmers also want to know if the weather is going to change since it affects field work, working livestock and other outside jobs. 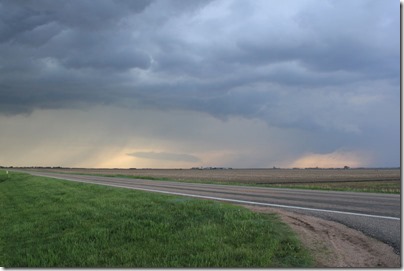 The photo above was taken after we got home a few minutes later but this one was taken looking west and back at the rain coming our way.  I think I was standing out at the end of the driveway for just a few minutes when it started sprinkling so hurried back to the house. 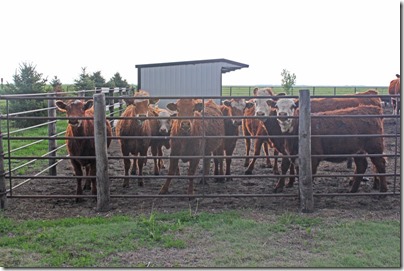 The heifers in the pen along the driveway had followed me and are just so curious.  They were feeling frisky because of the cooler weather and the storm coming so rushed away when I walked closer. 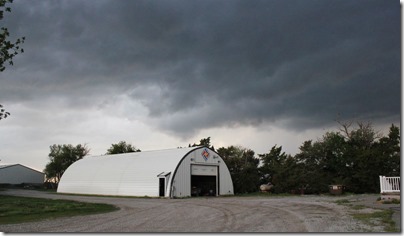 Hurry, hurry so I don’t get wet….made it before the downpour.

This was in our newspaper recently and my husband broke out laughing when he read it and showed it to me right away and I too thought it was so funny.  It is so us…I am always wanting to trim his busy eyebrows or snip that long eyebrow hair that pops up and annoys me.  Even though he has the beautician that cuts his hair trim his eyebrows, they sometimes need attention before the next hair cut and out come my scissors!
Lynn
Posted by Lynn at 9:26 AM 1 comment:

My local guild had an auction of small quilts several weeks ago and this is what I made to donate.  The guild uses the money to pay for programs and operation of the guild.  I started with a block from this book – Little Brown Bird by Margaret Docherty. 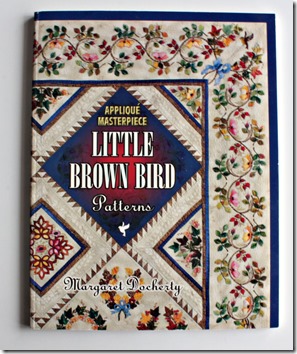 The block on the left is the one from the book and the one on the right is how I changed it.  I decided to make a vase rather than an urn and added a few more berries. 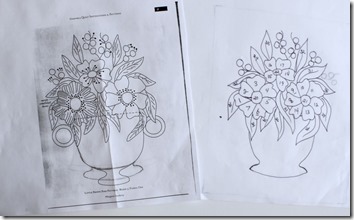 I fused the flowers/leaves and vase to the background then did a buttonhole stitch on the machine around all the edges. 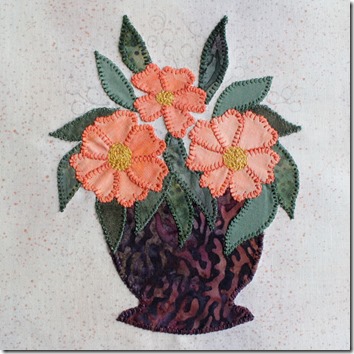 I added a very narrow ( 1/8”) folded orange fabric inside the one border.  I made the border wider as I wasn’t sure how wide I wanted it and knew I could cut it down after it was quilted. 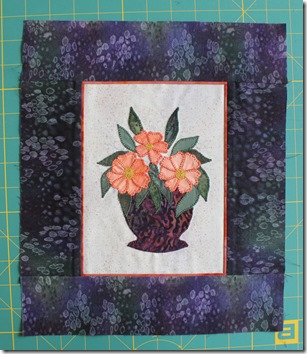 Here are a few close up photos of the quilt after it was bound.  As you can see I added another folded piece of fabric (flange) to the inside of the binding.  I really like the way the two skinny orange pieces pull the color of the flowers to the outside of the the quilt. 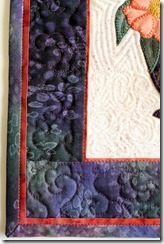 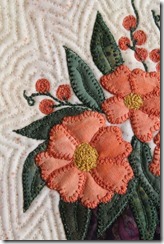 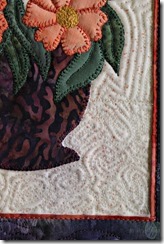 It was a lot of fun to quilt and turned out just how I had imagined it.  I had it done a few days before I had to turn it over to the guild to be auctioned so got to enjoy looking at for a bit.  It now lives somewhere else and hope it is a bright spot in it's new home. 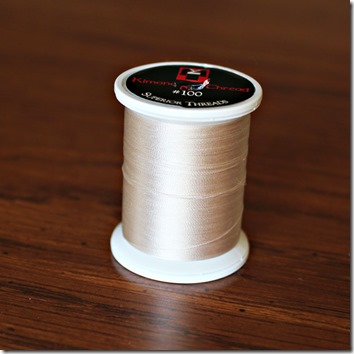 This is the last thread I will be talking about quilting with unless I purchase something new.  This is Kimono Silk Thread by Superior Threads.  It is a 100 wt. thread that is made from long silk filaments.  This thread is the same weight as the YLI silk thread so is very comparable to it. 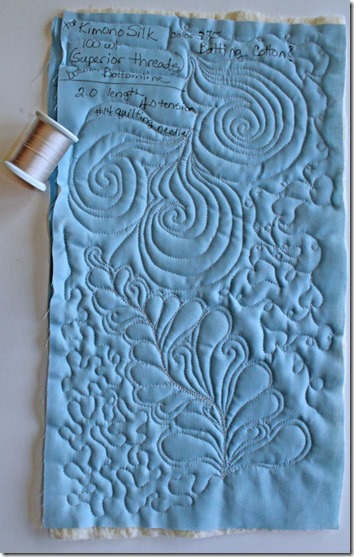 Silk thread is just luscious and so very shiny.  It is very pretty when stitched out on the quilt sample and since it is the lighter weight silk thread it results in a fine line of stitching.  The backtracking doesn’t show and this would make a wonderful thread for quilting heavily in the background of a quilt as it would not build up so much thread.

Using my Bernina 730 (old model), BSR and a stitch length of 2.0 I didn’t have to adjust the tension off of the default of 4.0.  I used a 14 quilting needle on this sample that has some sort of cotton batting in the middle. (more of those batting scraps that are not marked)  I used Bottom Line from Superior Threads in the bobbin and it paired nicely with this silk thread.

This thread was a joy to stitch with and would use it again.  I would however consider the size of the project and the amount of thread I needed to use as it is a little pricy.  This would be a lovely thread for hand applique as well.

Here are the 5 of us on Saturday morning just before we headed out and towards our homes.  We usually all buy a t-shirts alike but this year we purchased the same design but different colors. We saw beautiful quilts, did lots of shopping and enjoyed being together.  Every year I feel the time goes quicker than the last.  It is hard to savor the sights when we pack so much into each day. 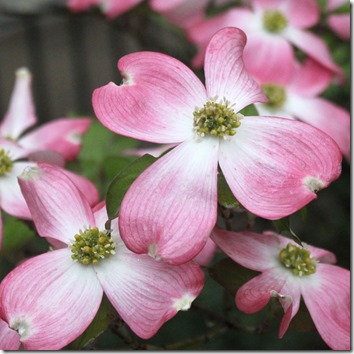 The dogwood trees were beautiful this year as were the azaleas and other flowering bushes.  We had cool weather the entire time and one day of rain so wore our jackets most of the time while there.  Here are more of the flowers photos I took. 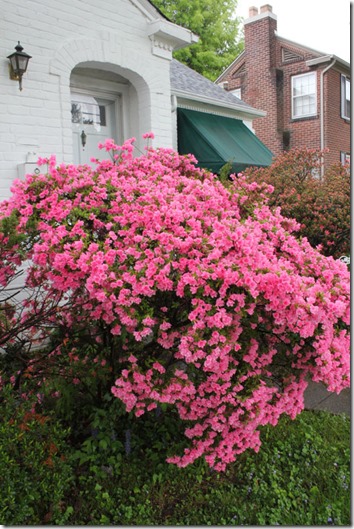 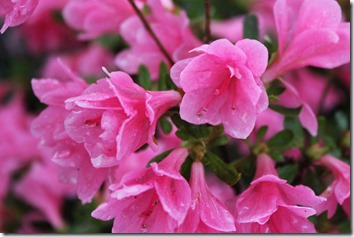 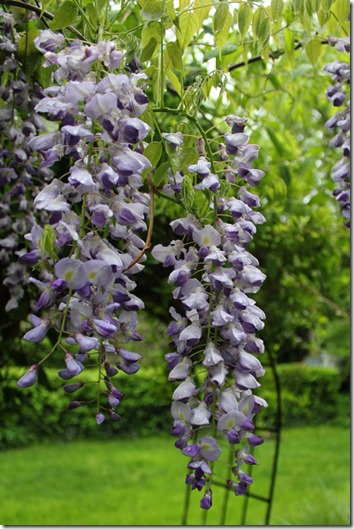 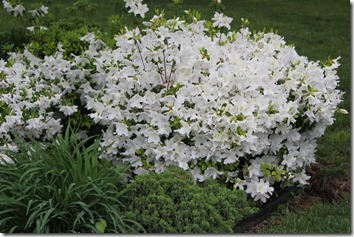 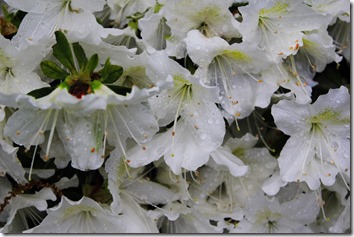 Hope you enjoyed looking at the photos of the flowers I took last week.  As you can tell on some of the photos there are water drops on the flowers.  It had rained off and on all day and quit just before I went out to shoot these photos.

Lynn
Nebraska
"To laugh often and much; to win the respect of intelligent people and the affection of children...to leave the world a better place...to know even one life has breathed easier because you have lived. This is to have succeeded." Ralph Waldo Emerson. I love living on a Nebraska farm and being able to look across the countryside from my sewing room window.