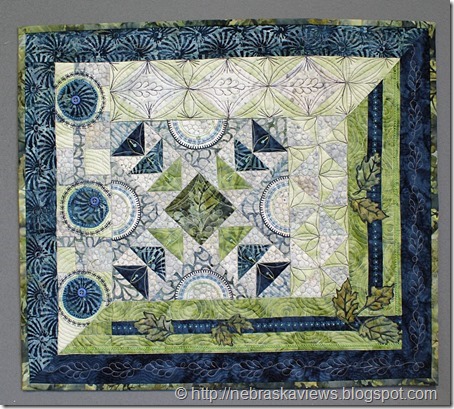 As promised here is the finished quilt – wall hanging.  It finished at 20” x 17.5”.  I did add some beading and a few buttons too so check that out in the detail photos below.  Some of my quilting lines do a squiggle here and there but I am trying hard not to be such a perfectionist and rip all the imperfections so they stay as first stitched. 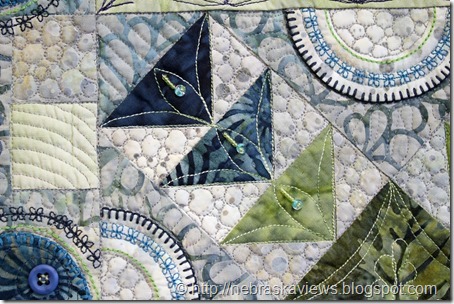 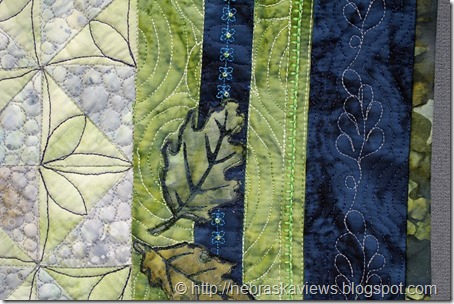 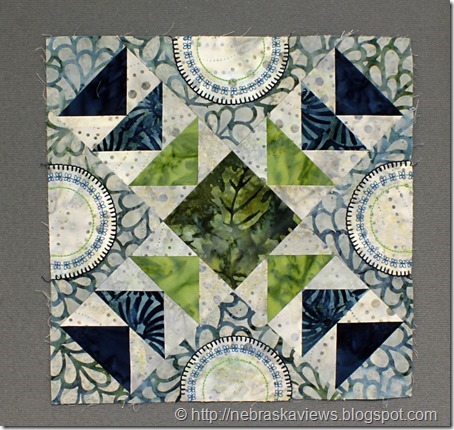 The Nebraska State Quilt Guild started a challenge in small groups July 2014.  My group had 4 members.  As a reminder here is my block before it went on it’s travels to get it’s borders.  As a reminder here are the challenge rules -It is a round robin challenge with a team of 4-5 quilters of your choice.  Each quilt will start with a 9” finished center block.  You will build around the center block using borders with the following shapes—pinwheels, circles, diamonds, applique, and some embellishment.  The front of the quilt must have at least one of each shape listed but you may use more of these shapes if you wish.  Each quilt cannot exceed 120 total inches around.  It must be quilted, bound and a label sewn on the back.

I blogged about making the challenge block on April 17, 2015 and what it looked like when I got it back in the mail after 3 friends added borders.  I loved it and put it on my flannel board so I could study it and make a plan to finish it.  It was fabulous and I wanted to do right by it with the quilting. 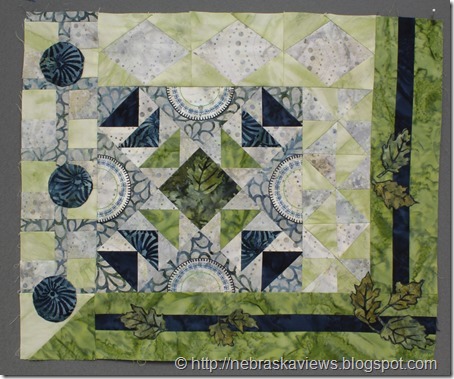 I decided it needed a final border around all 4 sides so laid the quilt on the fabric choices.  I do want to point out the angled border on the bottom left hand side.  I liked the look one of the gals did so re-fashioned the top right hand side to have the same angle.  Now it definitely has a light top and darker bottom. 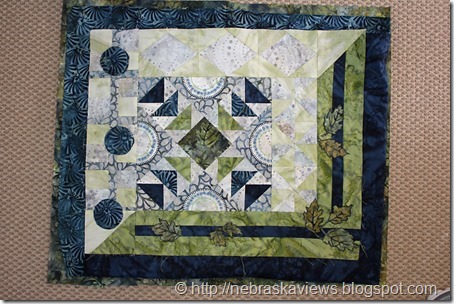 Of course fate stepped in and I didn’t have enough of the lighter navy fabric for the two borders (left and top)  Since it is a busy print I decided to just piece it matching the print design.  I pressed under the seam allowance on one side then found it’s perfect match and used Elmers School Glue to run a small line of glue on the seam allowance, matched the fabric, and pressed it to dry the glue.  I could then flip the fabric over and stitch the seam in the crease and know it would match.  I pressed the seam open to make the join less visible. 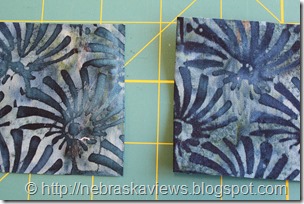 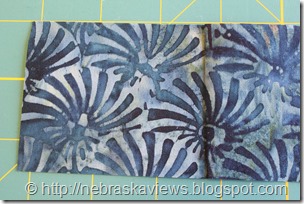 Here is the corner where the pieced border is located.  I have to search and search for the spot and I am the one that pieced it!  The seam is straight down from the large white headed pin….can you see it now?  The seam lines up with the corner so almost looks intentional if you can see it. 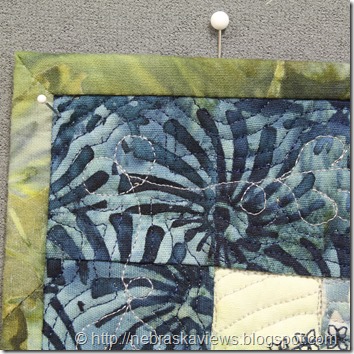 After the borders were all done and I did a little machine embroidery using the same built in stitches on my machine that I used in my block.  I stitched the flower like one down the navy strip in the green border and circles around the appliqued navy circles on the left.   Next on to quilting!  I want you to notice the vertical lines in the quilt below.  That is not machine quilting but my basting thread.  I used the wash out, water soluble thread from Superior Threads called Vanish.  This is the first time I have tried this technique and really like how it held the quilt together. 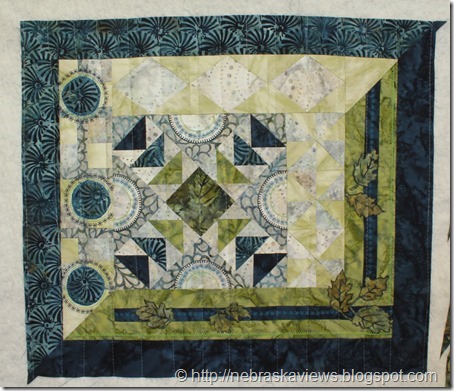 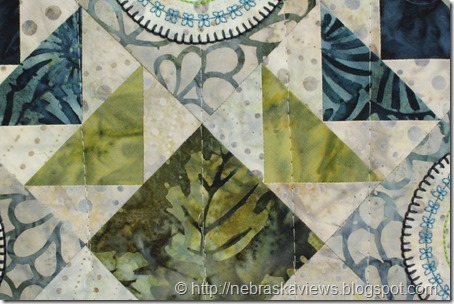 I used this thread on the top and bottom in my machine and basted the quilt top, batting and backing together using the walking foot.  I did stitch from the center down and from the center out going both ways and had the lines about 1 1/2” apart then flipped the quilt over and again stitched down from the center to the outside on the other half of the quilt.  I lengthened my stitch about to the maximum but didn’t use the basting stitch as that tended to gather it a bit.  I could have stitched lines going the other direction but decided this was enough to hold it securely while I quilted it.  I did remove some of the basting lines if they were in the way of some of my quilting lines but left the rest  and removed it after I had the entire piece quilted.  I just soaked it in cool water until all the thread disappeared then washed gently using Quilt Soap.  I do use my bathtub so the quilt can lay flat during this process.  I rinsed it several times pressing the clean water through the quilt then used a large towel and rolled the quilt and pressed down to remove some water.  I lay it on another clean towel or sheet and block to make it square.  I know this is rather detailed but wanted you to know how I treated the quilted quilt.  Here is  last bit of info. for you  that I feel is very important - I don’t trim and bind the quilt until it is blocked.  Yes the batting stays together during the washing/rinsing and I have found I get a quilt that is more square this way. 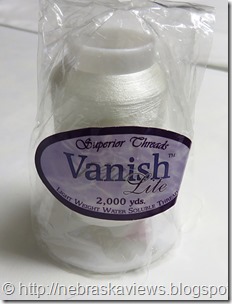 I used the following threads to quilt my challenge.  As you can see there is a variety of types and brands. 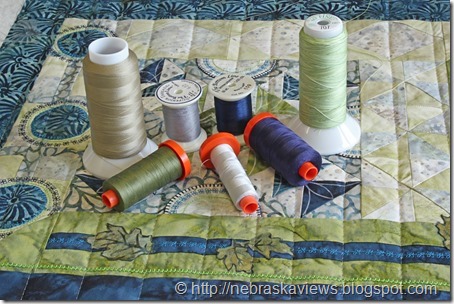 Come back tomorrow to see the completed quilt as this post is long enough.

Lynn
Nebraska
"To laugh often and much; to win the respect of intelligent people and the affection of children...to leave the world a better place...to know even one life has breathed easier because you have lived. This is to have succeeded." Ralph Waldo Emerson. I love living on a Nebraska farm and being able to look across the countryside from my sewing room window.